Searching for the Soul of Annapolis 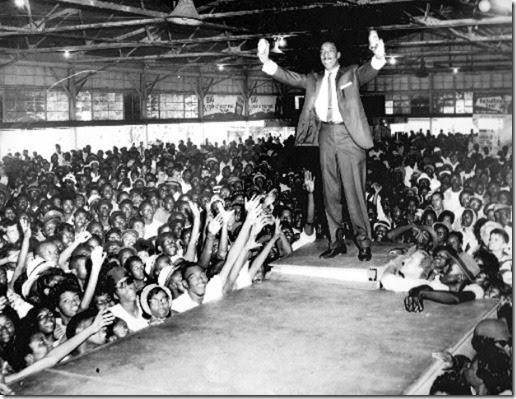 On Wednesday, June 27, the Primary Elections will be over and I invite you to join me at 49 West from 7:00 p.m. to 9:00 p.m. for a show I researched and put together—SEARCHING FOR THE SOUL OF ANNAPOLIS.  I think you will enjoy this presentation. The genesis of this show is from meetings I had with Mayor Buckley and Brian Cahalan to educate them on the Crystal Spring development during the last City election campaign. Brian is co-owner of 49 West. They were rather intrigued about the old Annapolis music scene and  my stories of my early involvement with soul music and the singers including my going to Carr’s Beach and the Howard Theater in DC and meeting James Brown in his dressing room through my friendship with Hoppy Adams.

I will present my memories of the Annapolis of the 1940s-1960s  the soul music scene, and growing up with the racial divide. I grew up at 79 West next to Larkin Street, now City Gate Lane. The show will consist of me doing a multi-dimensional presentation with great old photos of Annapolis back then and the soul music scene—Carr’s Beach, Hoppy Adams, The Van Dykes, and the other bands and bringing Little Royal and the Swing Masters from DC to play at my High School senior party at Annapolis Roads.  My friends and I also went to DC to black night clubs and heard and met great artists like Billy Stewart and even Wilson Pickett.  There will be videos of soul greats including the best recorded of James Brown.

There will be plenty of old soul music with the pictures and stories of the singers. The show is free with donations to the Crystal Spring Legal Defense Fund encouraged.  The Mayor will be there as will Brian.

Why not come out and join us for some fun capturing the great soul sounds of the period and reminiscing about that period in Annapolis history.

Top Billing: Searching for the Soul of Annapolis

Carr's Beach with Gerald on the far left, middle

Annapolitan Gerald Winegrad, 73, grew up in Annapolis during the 1940s through the ‘60s. He was a member of the House of Delegates from 1978 to 1983, and the Senate from 1983 to 1994. Over the years, he rose to the rank of Commander in the U.S. Naval Reserves, and is an environmental activist. And, through it all, he’s been a musician, too.

As a young man, Winegrad became very involved in the soul music scene. In that segregated era, he was drawn to the spectacular concerts staged at Carr’s Beach, one of the rare places African-Americans could enjoy a day at the beach in this region.

Wednesday evening from 7 to 9 p.m., Winegrad is hosting a multi-media presentation, “Searching for the SOUL of Annapolis,” at 49 West Coffeehouse, 49 West St., Annapolis.

The presentation, Winegrad said, is the product of much research and gathering of old photos of the City scenes from that era and those of Carr’s Beach – and created after much cajoling from Brian Cahalan, owner of 49 West..

The show will consist of Winegrad doing a PowerPoint with great old photos of the Annapolis soul music scene, including some of Carr’s Beach, famed Radio Station WANN DJ Hoppy Adams, and the great performers Winegrad knew, met, saw live in concert, or listened to during the period of his youth growing up in Annapolis starting in 1946.

He said Hoppy Adams took him under his wing and arranged for Winegrad, then a teenager, and his friends to meet James Brown between the performer’s Bandstand-on-the-Beach Shows at Carr’s Beach.

As Winegrad discusses the various soul greats who performed at Carr’s Beach, their music will be playing. He will also present “an awesome live performance by James Brown, the King of Soul, in 1964, perhaps the best ever captured on video.”

He will also discuss race relations, segregation, and overt discrimination occurring back then, including to the performers, and how soul music helped soothe the wounded soul of Annapolis and break down racial barriers.