District 30 Democratic Club Officers and Board of Directors 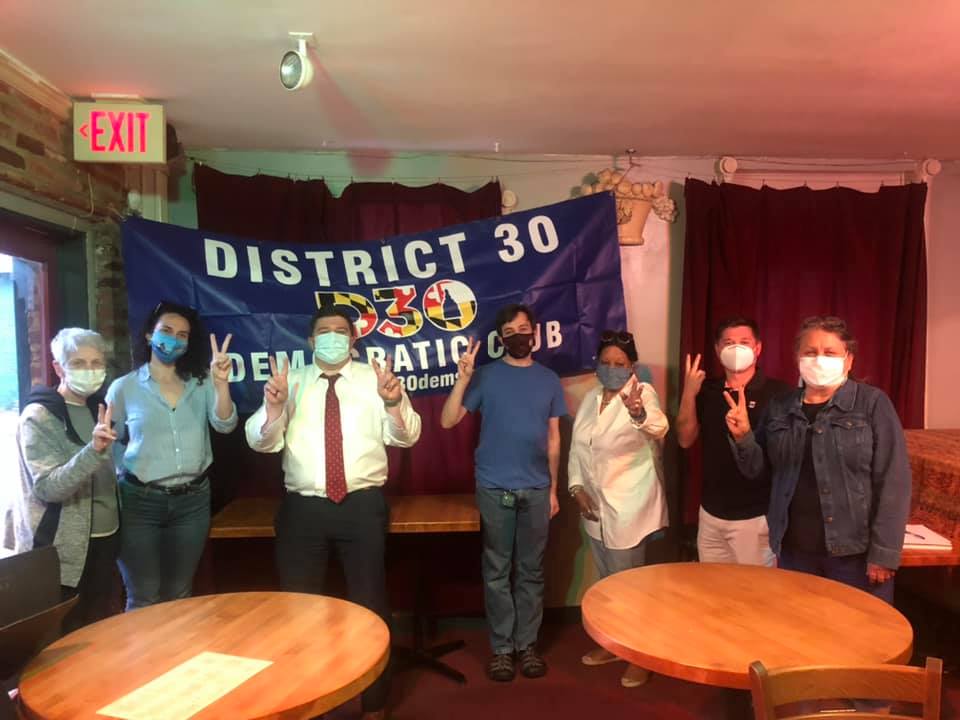 Scott was born in the old Annapolis Hospital and now works a block away from it in his law office on Cathedral St. After law school, he clerked for Nancy Davis-Loomis, the head Administrative Judge of Anne Arundel County at the time. He has volunteered on numerous community boards and committees, including, but not limited to: the American Bar Association's Commission on Homelessness & Poverty, The Annapolis Human Relations Commission, The Bates Legacy Center, the Anne Arundel Community Action Agency, the Anne Arundel County Board of Appeals, Annapolis Small Business Recovery Task Force, Mayor Gavin Buckley's Transition Team and the Annapolis Civilian Review Board Advisory Panel.

Scott got his start in politics by campaigning for Delegate Erek Baron in his 2014 race. Scott lives with his life partner Meredith and two children in the Lindamoor community. He regularly doesn't do triathalons and doesn't run marathons. You can normally find Scott on Cathedral St. or at 49 West drinking coffee when he is not with his family, in court or doing what he can for the community.

Melissa is a native of Anne Arundel County and moved to the Wild Rose Shores neighborhood in Annapolis Neck in 2008. She comes from a family of strong civic engagement and has been actively involved in supporting Democratic candidates at every level of government, from volunteering on the 2008 and 2012 Obama campaigns to doorknocking for Speaker Mike Busch, Senator John Astle, Congressman John Sarbanes, and Councilman Chris Trumabuer. She has also organized and hosted many large and successful Democratic fundraisers at her home, including those for the D30 Democratic Club.

Most recently, Melissa served as the Operations Director of Cheryl Miller’s campaign for Maryland State Delegate representing our great District 30A. It was during this time that she gained invaluable insight on the diverse issues that affect our community, and more importantly, some of the common threads that can be used to strengthen it. This experience fortified her resolve and commitment to be a “Do-Something Democrat!”

Melissa graduated with Honors from Spelman College where she majored in Economic and minored in Management & Organization. Her varied professional experience includes being a Buyer for Lord & Taylor Department Stores in NYC, an Event Consultant for various organizations throughout Maryland, including Steps to the Cure and the Four Rivers Heritage Area, and a Realtor with Berkshire Hathaway Home Services in Annapolis. Melissa’s other interests include pillates, holistic health techniques, rooting for the Washington Redskins, and using her culinary talents to feed crowds from two to two hundred!

Gail has throughout her career worked to enhance the lives of the residents of the community in which she lives.

As a young woman, Gail worked in Washington, D.C., with U.S. Senator Abraham Ribicoff of Connecticut and U.S. Representative Fernand J. St. Germain of Rhode Island, as well as with Sargent Shriver, Director of President Lyndon Johnson’s War on Poverty.  Gail received her Masters of Social Work from the University of Maryland with a specialty in community organizing in 1994.  She later joined the Department of Family Services in Prince George’s County as program manager for the Community Integration Program and the Infants and Toddlers Program.  She received the Governor’s Citation for outstanding contributions to young children and families of Prince George’s County.

Gail and Steve moved to Annapolis in 1995 and in 2001 she joined the staff of County Executive Janet Owens as a community and constituent services specialist. In an August 2003 Capital article, “She’s an Advocate of the People,” a community leader spoke of Gail's patience, her determination and her willingness to make one more phone call, to try just one more tactic at getting an answer to resolve the issue at hand.  Ms. Smith was quoted as saying, quite simply, “Our job is to build relationships in the community.”

Following her work in the Owens administration, Gail served for three years as the legislative assistant to Anne Arundel County Council member Joshua Cohen. When Councilman Josh Cohen was elected Mayor of Annapolis, Gail served in his administration as the director of services, ADA coordinator for the City of Annapolis and a member of the mayor’s senior management team from December 2009-2013.  Gail was also the mayor’s liaison to the Housing Authority of the City of Annapolis, working to build a strong and collaborative partnership between the City and HACA.

In 2014 Gail left city government and was honored to be able to serve as Legislative Assistant to our District 30 House Delegate and Speaker Mike Busch until her retirement in 2017.  She has been active in Democratic politics her entire life.

Jackie was born in Annapolis, raised in Eastport and graduated from Wiley H. Bates High School.  As president of Bloomsbury Square Resident Council, where she resides, Jackie has been successful in implementing community programs to improve the Bloomsbury Square residents’ quality of life: the Let’s Talk social youth group; the After School Program; and Leadership Skills: Preparing Our Youth for the Future. She is president of the Resident Advisory Board, which oversees all of the Annapolis Housing Authority’s Resident Councils. As a Board Commissioner of the Housing Authority City of Annapolis (HACA), appointed by the Mayor of Annapolis and confirmed by City Council, Jackie has been successful in developing various opportunities for educating the public, providing assistance to those in need and problem solving. She also serves as Vice President of the Ward One Residents Association, which allows her to address issues of concern within Ward One and beyond. She is Chairman and founder of Bloomsbury Square Day (now Bloomsbury Square Unity Day), and was Instrumental in obtaining the Bloomsbury Square community signage. Her awards and recognitions include: Martha Wood Leadership Award presented by the Mayor of Annapolis and City Council; Community Service, Annapolis Police Department; HACA Pathways to Opportunity Initiative; St. Phillips Church Strengthening the Family and Community Program; and the Dr. Martin Luther King, Jr., Humanitarian Award. Jackie attended Morgan State College and Sojourner Douglas College. She is currently employed as a retail associate with A.L. Goodies; her previous work experience includes substitute teacher in Anne Arundel County and social/case worker with the Anne Arundel County Department of Child Protective Services. Jackie’s passion continues in all of her endeavors and she believes there is more work to be done!

Born and raised in deep red Indiana, David Duba was fortunate enough to attend the University of Miami where he developed his liberal values, studied Community Development, and met his fiancée. In 2017, when his fiancée got a job as a school psychologist at AACPS, David moved to Annapolis for love and stayed for the politics! New to Maryland, he's committed to staying here in Annapolis and getting involved in the community.
As a social studies teacher at Bowie High School, Mr. Duba has a passion for education and education policy. He's excited about being on the Board of D30 Dems where he can serve his community and support democrats here in District 30. He hopes to help the club to build on the historical wins in 2017 and 2018, to connect with all aspects of the District 30 community, and to support local elected officials.
Silas Denton

Silas made Annapolis his home in 2014. Although born and raised to early adulthood in Fredericksburg, VA he fell in love with Annapolis and Maryland, took up residence, and quickly became immersed in an array of civic and business endeavors. Silas actively campaigned for Gavin Buckley for Mayor in 2017 and subsequently served as Field Director to Joanna Bache Tobin in her successful run for the Board of Education District 6 in 2020. Silas aspires to throw his hat in the ring and run for local or even national office one day.

Professionally, Silas has sought out assignments offering wide exposure to the inner workings of government and business. At an early age he served as Jury Clerk to Stafford County. In Maryland, he first took on a “portfolio career” – spearheading scheduling, logistics, and special projects for no fewer than three chief executives simultaneously. Silas then took on a stint to gain exposure to a more traditional office-setting – in a position with responsibilities of national-scope, he spent four years with Fidelity Residential Solutions in downtown Annapolis. Today, Silas has aligned his passion for the Chesapeake Bay and boating and serves as Fleet Technician for the global concern known as SailTime at their Eastport location.

Passionate about paying-it-forward and fearless in taking on new endeavors, Silas continues to fill his life with opportunities to support political initiatives that change lives for the better, volunteer work that serves individuals and underserved communities, and professional assignments that expand his mind.  Silas presently attends Anne Arundel Community College and is working toward a degree in law and jurisprudence. You can most often find Silas in Annapolis, but one never knows if he will be on the land or out on the water. He resides with his chosen family – partner Dillon, father and mentor John, and a ~100 pound Weimaraner named Bentley – well within the western quadrant of District 30.

Shawn was born and raised in Calvert County with a family that put a strong emphasis on building up the community. He went to college in Western NY for Intercultural Studies, and completed a Masters in Theology from Wesley Seminary in DC in 2013. Shawn married his high school sweetheart in 2009 and moved to Annapolis where Rachel - Shawn’s better half - is a nurse at Anne Arundel Medical Center. Once getting settled in Annapolis they began looking for ways to impact the community. They volunteered for the International Rescue Committee in Baltimore helping refugees get resettled and found Revolution Church in Annapolis where they have helped plan and facilitate community events such as feeding those in need or eliminating outstanding medical debt in our city. Since 2010 Shawn has worked for or volunteered with Revolution Church on a weekly basis to organize community events and currently works part-time as the children’s pastor. He also works in the IT department of the Key School. With every decision that Shawn makes the question of how to put people first, comes to mind - especially the least of these. Shawn hopes that future work with local politics and progressive movements will enable him to put others first and bring justice in an even more meaningful and impactful way. Shawn and Rachel live in Edgewater with their two young children
Do you like this page?
Tweet