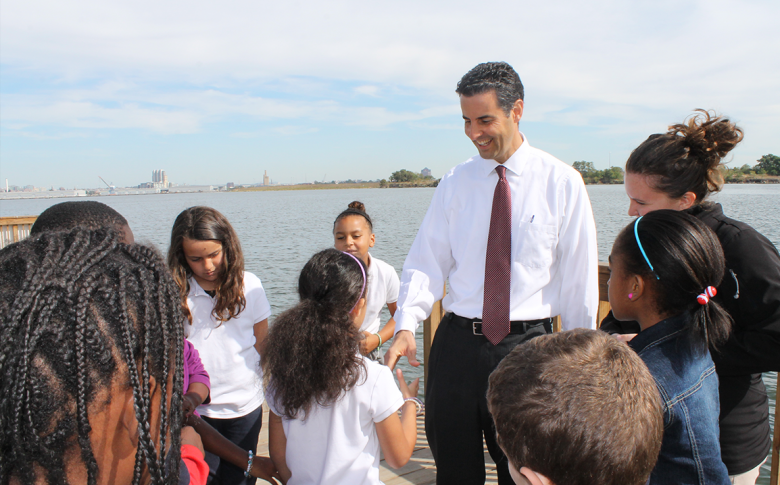 Born and raised in Baltimore, Congressman Sarbanes and his family live in Towson, which gives him the opportunity to drive home every night and hear from the people he serves. Listening to their concerns allows him to better represent Maryland, and has shaped his work in the U.S. House of Representatives.

Fighting Back Against Big Money in Politics

With big money influencing politics and the American government more than ever before, Congress’ growing dependence on campaign contributions from the wealthy and well-connected is drowning out the voices of everyday Americans. As a result, the public’s trust in government is eroding. To counter the influence of big money in politics, Congressman Sarbanes is leading the effort in Congress to build a democracy of the many, not the money. The Government By the People Act (H.R. 20), which was authored and introduced by the Congressman, would establish a citizen-led alternative to the current big money-dominated campaign financing system.

Working to Protect the Environment

Marylanders have always had a strong tradition of environmentalism rooted in a passion for the Chesapeake Bay. Congressman Sarbanes has led efforts to clean up this natural treasure with a particular focus on empowering Bay watershed residents to become citizen stewards of the Bay and play an active role in restoring it. The Congressman has also worked to expand environmental education opportunities for children around the country. His proposal, the No Child Left Inside Act, would support outdoor learning activities at schools and non-formal environmental education centers, as well as provide professional teacher development programs and the creation of state environmental literacy plans.

As part of the development and implementation of health care reform, Congressman Sarbanes has focused on ensuring that there are enough health care professionals to provide quality care for all Americans. He authored legislation called the Primary Care Physician Reentry Act, which would combat America’s shortage of primary care physicians by encouraging mid-career and retired or retiring physicians to return to practice. The legislation would provide training and financial assistance to physicians returning to medical practice in exchange for their service as a public health provider.

Giving Students the Tools They Need to Succeed

Congressman Sarbanes has worked to expand access to higher education by supporting financial assistance opportunities like the Pell Grant program. In 2008, he authored the law that created the Public Service Loan Forgiveness Option, which provides graduates with forgiveness of remaining student loan debt after 10 years of work in public service or the nonprofit sector. The new law helps teachers, nurses, first responders and other public servants pay for college.

Congressman Sarbanes graduated from the Woodrow Wilson School of Public and International Affairs at Princeton University and studied law and politics in Greece on a Fulbright Scholarship. After graduating from Harvard Law School, he returned to Baltimore, where he clerked for Judge J. Frederick Motz on the federal district court and the following year began his law practice at Venable LLP.

The Congressman spent 18 years at Venable, serving as Chairman of the firm’s health care practice for six years, where he represented nonprofit hospitals and senior living providers in their mission to deliver high-quality health care to the people of Maryland. Working with public interest organizations like the Public Justice Center, Congressman Sarbanes championed efforts to protect the environment and to ensure equality and opportunity for all Marylanders.

To help make Maryland’s public school system the best in the nation, Congressman Sarbanes also worked for the Maryland State Department of Education (MSDE). He split his professional time between Venable and MSDE so that he could be involved in education policy even as he continued practicing law.

Since childhood, Congressman Sarbanes has attended the Greek Orthodox Cathedral of the Annunciation in Baltimore and he has also been active with his wife and children in the Bolton Street Synagogue. For more than 20 years, he served as a board member of the Institute for Christian and Jewish Studies, which seeks to promote understanding and dialogue among people of different religious faiths.